Panera and the Satiric ‘Criminal Investigation’ Over Bagel-Slicing Techniques 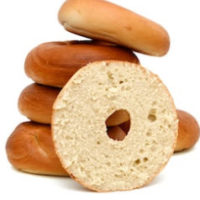 The word is satiric with a small s- not Satanic with a capital S. But with the recent controversy about bagel slicing of Panera’s bagels, the word Satanic was close to being used in the very public fray. New Yorkers take their bagels very seriously. So seriously, in fact, that according to Brooklyn Democrat Justin Brannan, unnatural slicing should be a Class A felony. City Councilman Robert Holden said he planned to join Mr. Brennan in his campaign to end illegal bagel-slicing in the Empire State. Of course, there will be no felony bagel mutilation statute. But the politicians were making a point about the importance of bagels to New Yorkers- whether born here or transplanted.

The furor began when a man tweeted a picture of some bagels which had been cut bread-like into oblong slices. Some people defended the practice as a good way to quickly satisfy a large group of hungry people. But many New Yorkers were unmoved. NYPD Chief of Detectives Dermot Shea jokingly called the rogue slicing a crime and assured citizens that “this would NEVER happen” in New York City.

This leads us to some true laws that are- well real laws still be on the books.

All kidding aside, there are some very unusual laws in New York City. No matter how unusual they seem, people can and do get prosecuted for violating them.

Some old laws have never been erased from the books. For example, public flirting is against the law in the Big Apple, and is punishable by a maximum $25 fine. This law probably has something to do with promotion or solicitation of prostitution. It’s also still illegal to dry clothes on a clothesline. When that law was passed, hanging clothes outside to dry was considered an eyesore. But today, it’s an eco-friendly alternative to clothes dryers. In other words, times changed, but the law did not. I am particularly sensitive to this type of class neighborhood warfare that existed making clothes lines illegal. My immigrant Italian grandmother, who lived with us as part of the extended family growing up, hung clothes to dry on her clothesline all through my youth. And many people in the hood could not afford a dryer or the cost of the utility to run it. In Venice, Italy it is considered glorious to see clothes hanging to dry in an out of windows. It is art.

Other laws are poorly drafted or have unintended consequences. You can also impress your friends and dazzle your dates by citing the puppet show ban. According to Section 10-114 of the city Administrative Code, people who stage such shows in “any window or open space of any house” may spend up to 30 days in jail. We’re not sure where this law came from. But I wonder if the “puppets/Muppets” of Sesame Street could be subject to being handcuffed in a NYC hoosegow.

For the most part, judges are legally powerless to reverse or revise odd laws. Judges technically lack the power to amend laws, they can say they are unconstitutional and throw them out, but that is not the norm. Judges take oaths to uphold the law. So, if a New York criminal defense attorney is going to change things like these, the activity must be outside the courtroom. So why I am writing about a topic that seems funny. Because unless we create public discussions about the law, the law may not be changed.  If people like us lawyers talk about issues, from the sublime to the extremely important, a movement for change is possible. That talk often translates to action at the statehouse where legislators have the power to make or amend laws.

Sometimes, direct advocacy is best. Lawmakers routinely hold hearings about proposed legislation. Attorneys can and do testify at these hearings to influence lawmakers. Letter-writing is also very effective. Typically, law-makers figure that every letter they receive represents about 1,000 voters.

So next time you see a bagel discussion taking over social media, its a reminder of what we can do to make old laws go bye-bye, existing laws enforced fairly, and new laws address real issues.

#VivaTheBagel. The modern day hashtag rally cry for engaging our citizens about law.